Take a Lesson from Down Under, Mate!

I have always been interested in alternative building methods—things like solar hot water, rainwater harvesting, grey water systems, etc. and I have sought out specialized training to learn them. I am an Accredited Professional in rainwater harvesting with American Rainwater Catchment Systems Association (ARCSA), which basically means I’ve been trained, tested, and have a proven track record of rain water harvesting system design and installation.

Rain Water Harvesting Around the World

That is why, when a buddy in Australia posted some pictures of a rain water harvesting system he is installing in the new house he is building, it piqued my curiosity. Turns out Australia is quite a bit ahead of America in terms of conservation. When I asked my friend about his system, he told me that all new homes there are required by law to have rain harvesting systems installed to supply water to their toilets, laundry, outdoor faucets, and landscaping. Go Australia!

Because of the recent droughts all around the country, I was intrigued by this. I love the idea of using rain water to help conserve our water supply. It also made me wonder why this sort of thing is so rare here in the states. It is strange that in a country that considers itself so progressive, most people have never seen or even heard of rainwater harvesting.

It’s not like this is a new idea—people have been harvesting rain for thousands of years. The ancient Romans mastered the idea. They even built an underground water cistern in Istanbul (or was that Constantinople?) that held 80,000 cubic meters of water. That’s over 21 million gallons. That’s a lot of rain water!

What If It Doesn’t Rain?

So, I did some homework to find out how much water you could collect from a 2,000 square foot roof during a drought in a region that has been particularly hard hit in the recent past—the Sacramento area. The answer? 17,250 gallons—during a drought!

Here are the numbers:

1. The average American uses 50 gallons of water a day for indoor use. If there are two people in a household, that’s 36,000 gallons a year. That number could be quite a bit less if they are using high efficiency plumbing fixtures, and even less still if they are conscious of not wasting water.

5. In an average year, these 26,250 gallons would supply 72% of the indoor water use for two average non-conserving adults. Currently, in the states of California and North Carolina, you cannot legally use rainwater for drinking or bathing (though other states like Washington allow it), but you can use it for non-potable indoor use, such as toilets and laundry. 100% of the indoor non-potable water needs for two people would easily be covered, even in a drought year, and for a lot more than two in a normal year.

How Much Do You Have To Store?

You might be thinking, yeah, but how feasible is it to try and store 26,250 gallons of water? The answer is: you don’t need to. Asheville gets rain year round and so needs a smaller holding capacity, but California typically only gets rain from October to April. So, for 7 out of 12 months, rainwater is being caught and used as it comes. There you’d only need to store enough to make it through the dry months, which is 10,900 gallons. That still might seem like a lot, but it can easily be done with a couple of 6,000 gallon tanks. Tanks that size are about 12′ x 8′. Here is a picture of one about that size, courtesy of rainharvestingsupplies.com 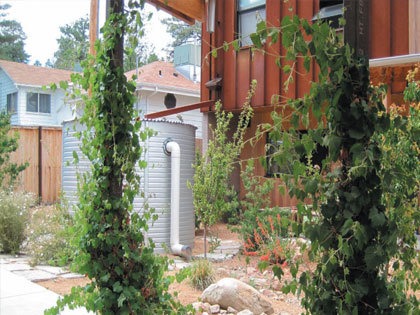 Here in Asheville you can get by with a much smaller tank. It seems to me that at the very least, right now we could take a lesson from our mates in Australia. They mandate that all their new homes have rain water harvesting systems, and they give rebates of up to $1,500 to homeowners to install them in new or existing houses. That just makes sense.

We could catch a good percentage of the water that we use, and that would make a huge difference in times of drought, and other times as well. Give me a call if I can help you with your Asheville rain water harvesting! 828-774-7076