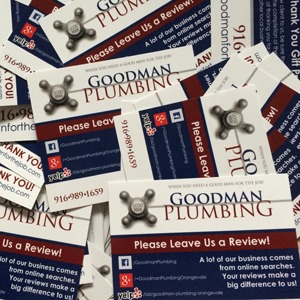 or The Saga of My Plumbing SEO Summer

People come up to me and randomly say things like, ‘How are you?’ or ‘How’s it going?’

What are they thinking?!

They have no idea what kind of a can of worms they are opening, because lately my thoughts are full of Search Engine Optimization (SEO), and they’re not gonna understand, they’ll just stare at me like I am from another planet if I say what’s on my mind.  Well, a few days ago I did it. I couldn’t take it anymore. I spilled the beans. I told some unsuspecting, well-meaning acquaintances of mine some of the low-down on my plumbing SEO summer saga. Guess what? They were actually interested. So I thought, you dear reader, might be interested too. How is it going? Well, let me tell you!

You, dear friends, can help stop my SEO saga. When you need a good man for the job, you are you gonna call? Goodman Plumbing, of course! You can tell all your friends that you love us and they should love us too, the old-fashioned way. Or at least, go click on our website and see what I’ve been staring at. And share, share, share! And try not to be too annoyed with me for posting plumbing things on Facebook all the time. Then, when we’re rich and famous and on the first page of Google, I’ll remember all you little people fondly, how you clicked so freely and saved our site’s rank. Maybe I’ll throw you a Chiclet or something. Ha ha ha…Ok, well, at least I can make myself laugh. Hopefully, if you try this SEO thing for yourself, you can avoid some of my pitfalls. Maybe next time someone asks me how it’s going I will have even more ideas…